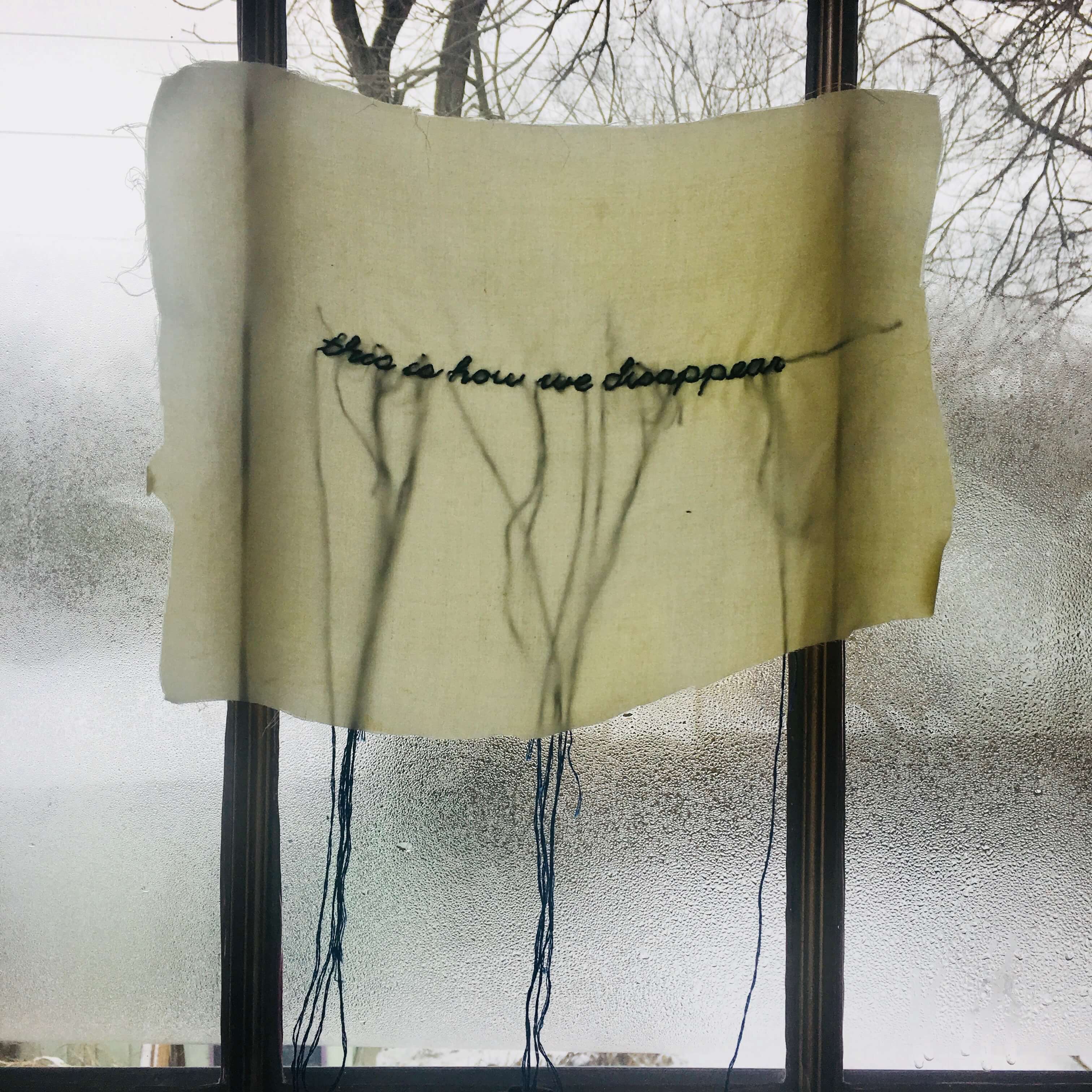 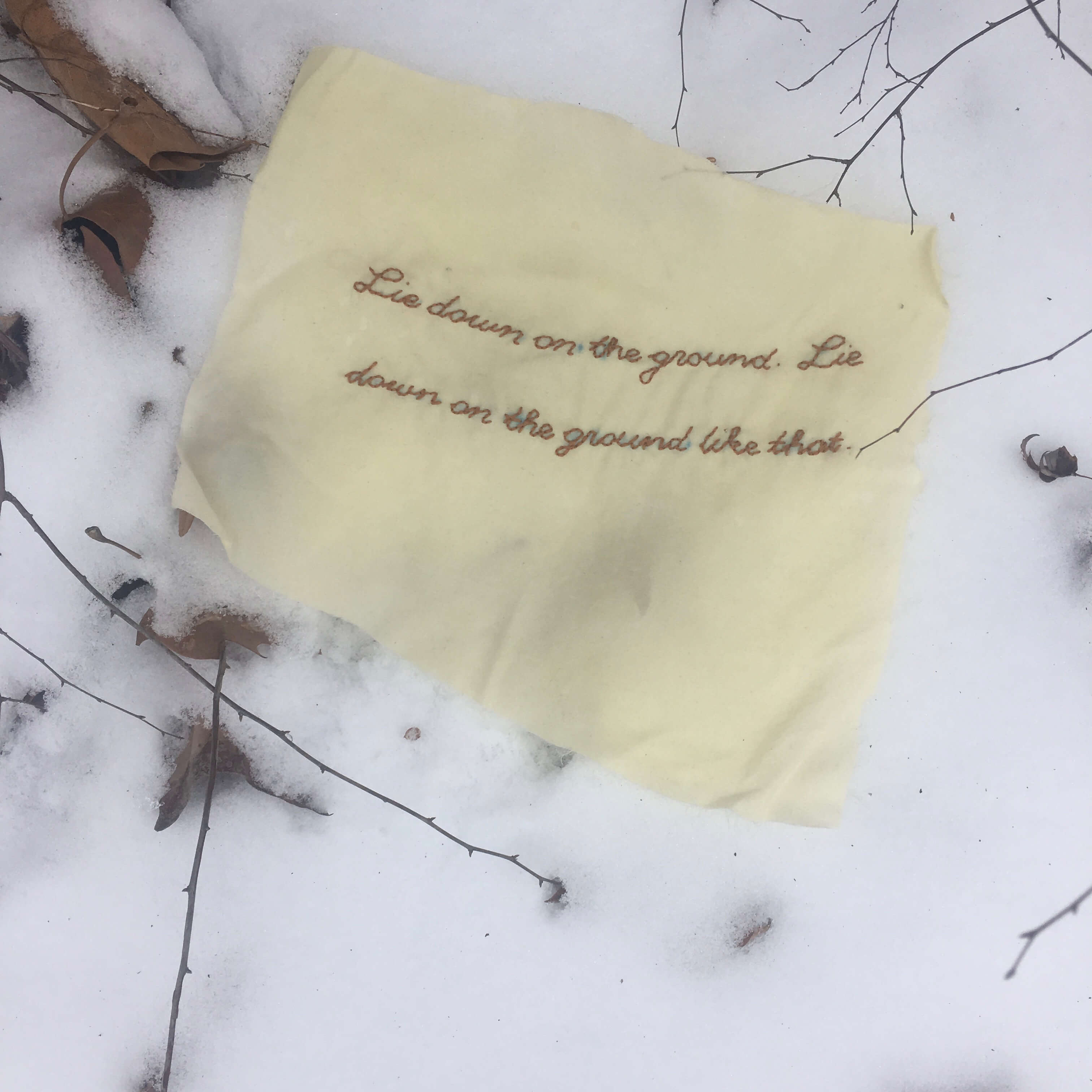 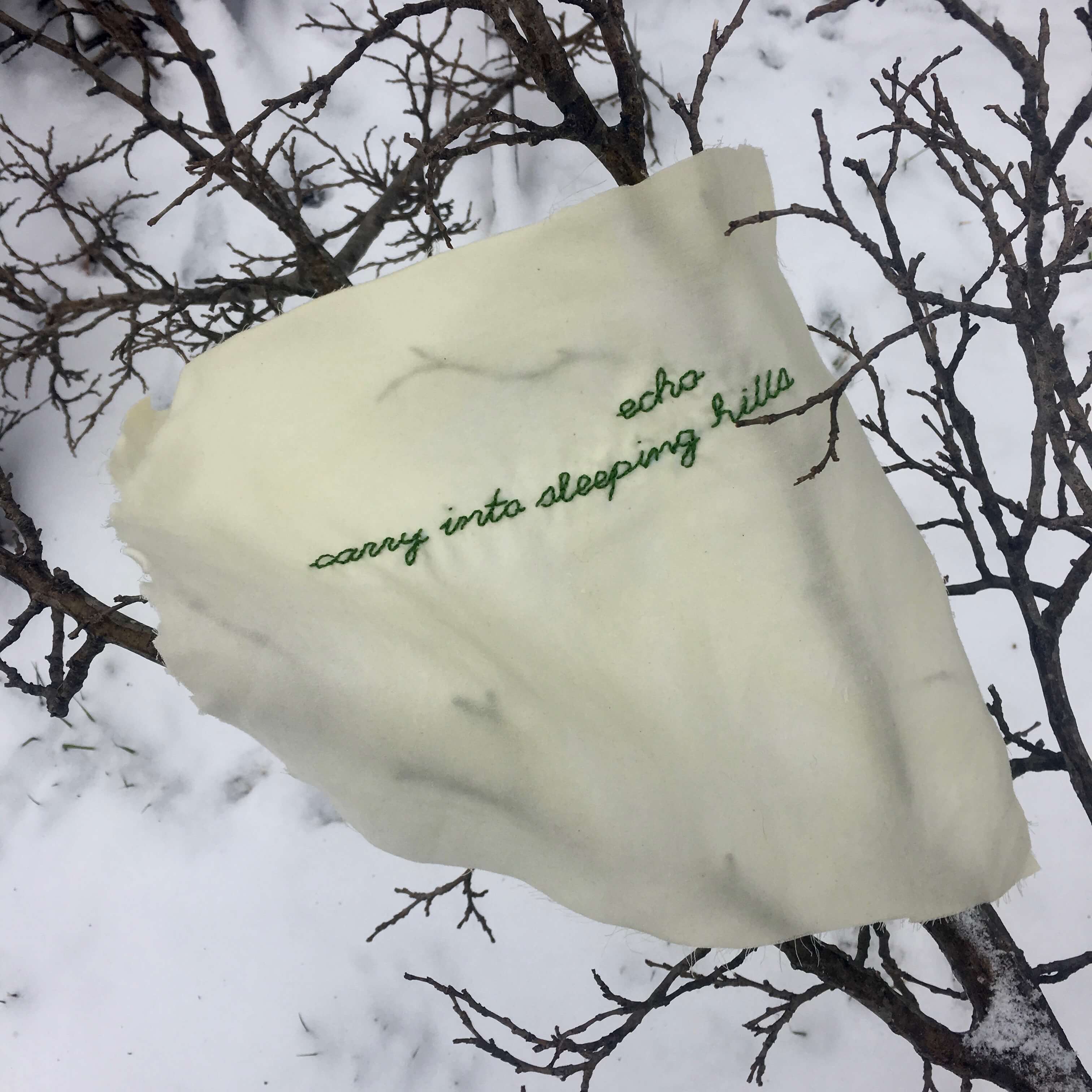 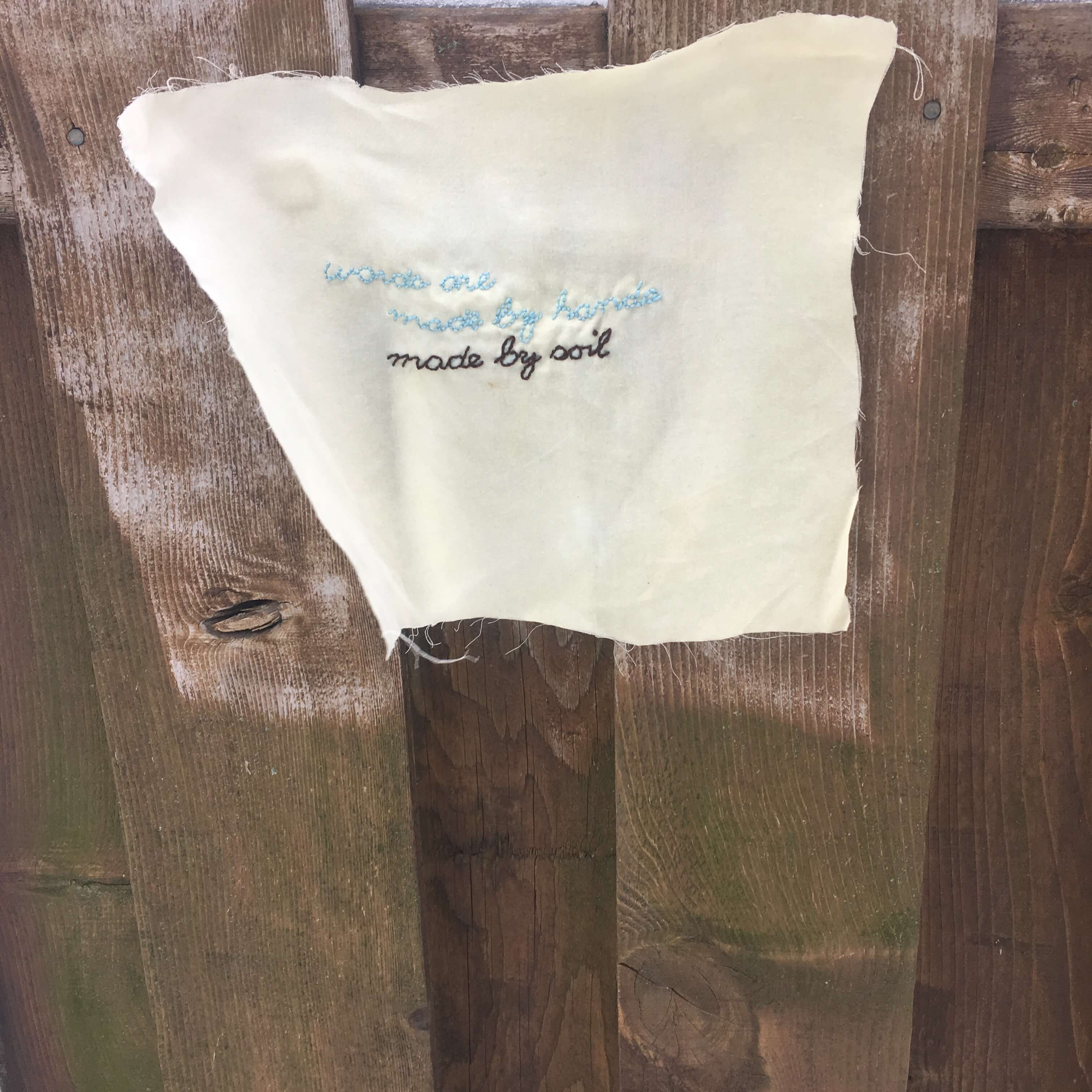 I made these embroidered panels while writing a series of poems about the allegorical figure Natura.1 I was trying to figure out how the poems—and the many voices speaking through them—fit together. Set in an imaginary world much like the desolate northern plains of the US and Canada, the poems are voiced by its landscape and its inhabitants, a tapestry of talking hills, lakes, and trees, icy ghost mothers, Natura herself, and the lost girls that haunt this essay. Part of the effort was translating something that was aural and visual and multi-layered in my mind—more like film or music from a chamber ensemble—into something that might fight neatly enough onto the pages of a book. But part of each writing project for me, is to figure out where the language comes from and what needs to come next, not just for the poem, but for the larger artistic and intellectual inquiry that each poem, and ultimately book, are only a part. As I was writing these wintery poems, I felt them entering my body. Not just the coldness and dull echo of the frozen forest, but also the chill settling into busy fingers. My hands didn’t want to just write these poems, they wanted to make them.

I’m a very physical person and there’s always some sort of corporeal component to my writing practice—for my earlier books, the somatics of the poems came through gardening and in long walks. But, for this project, the desperate lack and neglect that precipitated the lost girl poems called out for care. So much of the project of Gentlewomen is recuperative—in the creation of a world that functions in a sort of alterity to our own—where neglect, abuse, and trauma are met with justice and tenderness. I wanted to care for the girls, as well as the hills and lakes and hawks on the power lines. On a bodily level, I wanted to provide such extravagant care to those ghost girls in the poems, girls that had re-homed themselves in the woods out of necessity, gone feral in the wake of trauma. And to imagine a way for them to claim their own kinds of home, some sort of magic that might start in these found scraps of fabric stitched into incantations.

It wasn’t until later that I realized in writing those poems I was doing my own kind of trauma work—a bodily excavation in the form of inhabiting these girls. For people who have experienced trauma, or at least those of us who still experience its reverberations, there’s a sense of being simultaneously in the present and past. I might be physically here in the moment, but flooded by resurfacing emotions from years past still lodged uncomfortably in my brain and in my muscle memory. So there’s a way in which in embroidering these panels that I was accessing another type of knowledge, one held in my bodily tissue. I’ve been thinking (and reading) a lot about trauma and embodied memory, both in the sense of personal trauma and of historic trauma that gets passed along culturally and epigenetically.2 But I’ve also been thinking about ancestral wisdom and how that, too, might be held in the body—and how it might carry a means for healing. In this physical practice of embroidery, I was able to access a different way of thinking and remembering. And I hope through the poems that came as a part of the work, I was able to imagine a different kind of family, a different kind of community, a different kind of mothering—one that might save the lost girls of the poems, and perhaps myself.

1. which later became a section of Gentlewomen (Noemi Press, forthcoming 2020)

2. intergenerational inheritance that occurs through a modification of gene expression rather than an alteration of the genetic code itself

Megan Kaminski is a poet and essayist. She is the author of two books of poetry, Deep City (Noemi Press, 2015) and Desiring Map (Coconut Books, 2012), with a third book Gentlewomen forthcoming from Noemi Press. Her poems and essays have appeared or are forthcoming in the American Poetry Review, The Atlantic, American Letters & Commentary, Denver Quarterly, Diagram, Seneca Review, and other journals. Currently she is working on a book about indeterminacy, attraction, and plant thinking.

Before joining the faculty at the University of Kansas, she made her home in Los Angeles, Paris, Casablanca, and Portland, OR. She is an associate professor in the University of Kansas' Graduate Creative Writing Program and a Keeler Intra-University Professor studying trauma and healing in the School of Social Welfare. She also curates the Taproom Poetry Series in downtown Lawrence.